Recently, Isabel and James got married in a beautiful wedding ceremony to which a large number of guests attended. James had proposed to Isabel a few months earlier during a romantic winter getaway to London. In addition, they had invited lots more guests to the after party of their wedding and so required a substantial buffet in order to please all their guests. The couple were pleased to hire the Hog Roast Ballymena, especially as they provided a vegetarian option so there was something for everyone at the buffet. 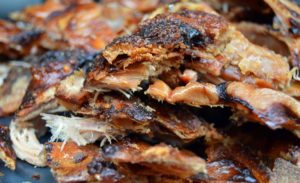 The Hog Roast Ballymena team arrived at the wedding in the evening when the partying was well underway and everyone was celebrating. They set up their stall outside the bar area of the wedding and began to cook the Hog Roast. Hungry guests eager for the food watched on in anticipation, waiting for the buffet to be complete. The Hog Roast team finally added the finishing touches to their buffet and opened it up to the wedding guests.

The guests thoroughly enjoyed the buffet and many of the guests returned for second and third portions. The Hog Roast Ballymena team provided a full slow roasted hog, cooked onsite, to the wedding guests which they presented on a finely laid buffet table. They served the main meat with apple sauce, crackling and homemade stuffing. Furthermore, the team served fresh, soft bread rolls and wraps to ensure that casual nature of the hog roast carried over to the food. Warm new potatoes, soaked in butter, were served alongside fresh salads which are offered on the team’s Menu Three.

Isabel and James really enjoyed the buffet and were very impressed by the service provided by the team. They were very friendly and polite and ensured that they continued the formal atmosphere of the wedding, however, they also ensured that they provided an upbeat service that went along nicely with the party atmosphere of the evening. The couple had the time of their life and everything had gone perfectly to plan. They would definitely recommend the Hog Roast Ballymena team to their family and friends and would use them again in the future.