Often the perfect accompaniment to good food is a good show, and that’s exactly what our most recent client Michael thought, when he’d hired a cabaret singer to come and perform at his venue. The owner of a pub with a separate function room, Michael needed to fill a date in the diary to get more money in, and decided to put on a show. He found a local act that performs a whole host of hits from the 60s right through to the modern day, and hired the team at Hog Roast Downpatrick to provide food, so he could have an Entertainment night. 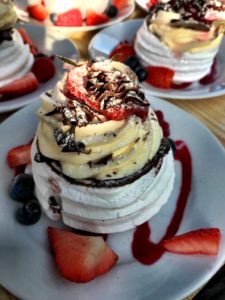 We arrived at the venue by 1PM in order to make the 7PM serve time. We slow cook all our meats to achieve the perfect taste to the meat, and the perfect crispiness to the crackling, and we do so using only raw, fresh ingredients on site. That’s why we always make sure to be on site for an event, plenty of hours in advance, which also gives us plenty of time to make sure that everything else has been taken care of, such as laying the tables or decorating the room. Today our catering assistant would lay tables with cutlery and napkins why our chef would butcher the hog and place it on the machine for roasting.

Guest began to arrive by 6PM and were shown to their seats by Michael’s staff, where they enjoyed drinks for a while. At 7PM the Hog Roast was served buffet style, in accompaniment of a seasonal veg medley and roasted new potatoes with a homemade onion gravy. It was served onto real crockery and our team were on hand to carry the plates back to the tables for anyone who needed assistance, such as one elderly lady.

Once everybody had eaten the singer emerged and performed the first act of his show. After desserts of Vacherins of strawberries and passionfruit cream had been served during the interval, the team from Hog Roast Downpatrick proceeded to tidy away their mess discreetly and dispose of any waste offsite.