It was the final day of the horse trials in Cargan. Every year they held a mini event from Cargan’s riding school which was open to anyone at any age to enter. The competition consisted of dressage in the morning followed by jumping in the afternoon and fancy dress for anyone who wanted. The theme for the fancy dress was ‘A Day at the Zoo’.  Rider and horse had to be dressed up to be counted in the fancy dress competition. Points were given for each event and at the end of the day they were added together and the person with the most points was the overall winner. A large cup and rosette were for the rider and a large sash was given to the winning horse. There was a lot at stake because everybody wanted to win. It was going to be a very close competition. The car park was full of horse boxes and trailers with horses tied up alongside them. The riders were grooming the horses making sure they were spotless as points were also given for how well the rider and horse were turned out. Riding boots were polished to perfection and with riders and horses looking perfect the competition could start.

The dressage started and the judges were sat in their places waiting to mark each horse and rider as they performed the complicated moves. After a salute from each rider at the end of every test the judges added the scores up and marked them on the board for all to see. After lunch the jumping was to take place. 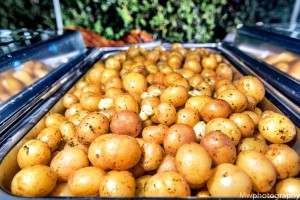 Hog Roast Cargan was to provide the food for a 150 people. Slow cooked pulled pork with crispy crackling, apple sauce & stuffing was chosen to feed everyone. A whole pig cooked slowly on one of our machines all morning and baby herb potatoes and a fresh crisp salad was prepared to accompany the meat. Tables were set out for people to come and sit and chat while eating to make it a really sociable event. Everyone was comparing scores and talking about how well each other had done.

Next was the jumping. With the course set out the first rider was ready to go. There were quite a few clear rounds and the competition was getting very close between the top four riders. The fancy dress was going to be the decider. A giraffe and elephant were chosen as 1st and 2nd places and what amazing costumes they were. It’s not every day you see a horse dressed as an elephant or a giraffe. The day ended on a high with everyone enjoying the day with good company and good food.